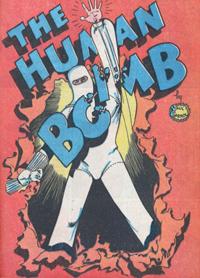 Roy Lincoln was a chemist who often collaborated with his father, a demolitions expert, on various experiments. In 1941, Roy's father developed a chemical known as 27-QRX which contained great explosive properties. Nazi agents learned of Lincoln's new chemical and attempted to steal its design so that they could use it as a weapon for themselves, thus giving Nazi Germany an edge over its enemies. The agents raided Professor Lincoln's laboratory and shot him dead. His son Roy, desperate to safeguard his father's work, drank the 27-QRX formula. The result of such a rash act, yielded bizarre side-effects. Roy Lincoln could cause any item he made physical contact with to explode. With this new power, he was able to defeat the Nazi assassins.[1]

Shortly thereafter, Roy developed a special suit made of fibro-wax which afforded him greater control over his abilities. Calling himself the Human Bomb, he became an adventurer and eventually a member of both the Freedom Fighters and the All-Star Squadron, operating first on Earth-Two and later on both Earth-X and Earth-One.

Retrieved from "https://heykidscomics.fandom.com/wiki/Roy_Lincoln_(Earth-Two)?oldid=1503177"
Community content is available under CC-BY-SA unless otherwise noted.