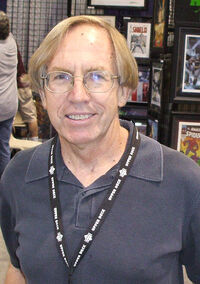 Thomas' love for comics started at an early age when he produced his own comic All-Giant Comics which he gave out to friends and family. As an adult, Thomas graduated from Southeast Missouri State University with a B.S. in Education and was a teacher for 4 years when he also explored his love for comics becoming the editor of the fanzine Alter Ego.

Roy Thomas was a veteran writer and editor for Marvel Comics and DC Comics. He is widely regarded for reviving the legacies of many Marvel and DC Golden Age heroes as well as his exhaustive work on titles such as Conan the Barbarian and the Avengers.

Retrieved from "https://heykidscomics.fandom.com/wiki/Roy_Thomas?oldid=157465"
Community content is available under CC-BY-SA unless otherwise noted.