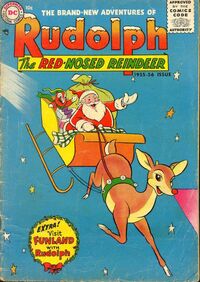 All of the other reindeer used to laugh and call him names; they never let poor Rudolph join in any reindeer games. Then, one foggy Christmas eve, Santa came to say, "Rudolph, with your nose so bright, won't you guide my sleigh tonight?" Then all the reindeer loved him, and they shouted out with glee, "Rudolph the Red-Nosed Reindeer, you'll go down in history!" And so he did.

Retrieved from "https://heykidscomics.fandom.com/wiki/Rudolph_(Earth-Twelve)?oldid=1716219"
Community content is available under CC-BY-SA unless otherwise noted.