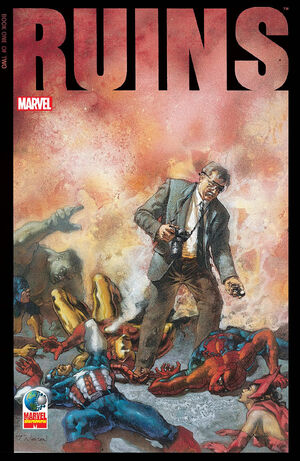 Death is everywhere. It's falling on us all. Let me find a answer before I go. Let me show them all how this happened. Please don't let me die in this place.

Appearing in "Men On Fire"Edit

Synopsis for "Men On Fire"Edit

Ruins follows former Daily Bugle reporter Phil Sheldon as he explores a dystopian alternate Marvel Universe where, in his words, "everything that can go wrong will go wrong"; a world where the myriad experiments and accidents which led to the creation of superheroes in the mainstream Marvel Universe instead resulted in horrible deformities and painful deaths. The narrative follows Sheldon as he tours the country investigating the after-effects of these events, researching a book about the strange phenomena in order to prove that the world has taken a wrong turn somewhere and hoping to complete it before he dies. As he journeys across America, the nature of the world is gradually revealed in the form of both interviews and cameo appearances from various figures from the Marvel Universe.

In the first issue, after witnessing the destruction of the last Avengers Quinjet (in this reality a radical secessionist rebel group rebelling against an oppressive American government led by 'President X', who have all either been killed or imprisoned), which has killed both Captain America and Iron Man, and encountering a decaying Wolverine, whose flesh is slowly falling off from the toxicity of his adamantium bone structure, Sheldon proceeds to a Kree internment camp in Nevada, which is situated on a nuclear test site, where the last survivors of a Kree invasion fleet are imprisoned and slowly dying of cancer. Clad in a radiation-proof suit, he interviews Captain Mar-Vell, one of the Kree prisoners, who tells him why their invasion failed; the Kree came upon the Silver Surfer, who had gone mad and torn open his own chest in a futile attempt to experience respiration once again, only to discover that the Power Cosmic emanating from the Surfer's body had been interfering with their scanners, preventing them from detecting a nuclear barrage which destroyed ninety percent of the warships. In Washington, D.C., Sheldon arranges a meeting with government agent Nick Fury, who attacks and almost shoots him, insisting that 'proved he was clean' and claiming that Captain America introduced him to cannibalism. They are interrupted by Jean Grey, here a prostitute, who offers herself to the two men for twenty dollars; but Fury shoots her dead and then kills himself. After his encounter with Fury, Sheldon visits Chicago and interviews Rick Jones, a morphine addict living with fellow addict Marlo Chandler, who tells the story of when Bruce Banner saved him from a gamma radiation blast; however, instead of transforming Banner into the mighty Hulk, the radiation transformed Banner into a monstrous green mass of pulsating tumors. Leaving the apartment, Sheldon trips over the corpse of The Punisher in the snowfall, and the issue ends with him on his knees as he begs to be allowed to show the world how this state of affairs came to pass.

After the first page showing the death of the Avengers one of the soldiers found Captain America's shield among the wreckage. We can assume that Cap was in the explosion that killed the Avengers although he was never seen. Thor's hammer is also seen held by a soldier, although it is not stated how the soldier passed the worthiness enchantment, if there is one, and the appearance of a version of Donald Blake in issue contradicts this.

Retrieved from "https://heykidscomics.fandom.com/wiki/Ruins_Vol_1_1?oldid=1689566"
Community content is available under CC-BY-SA unless otherwise noted.