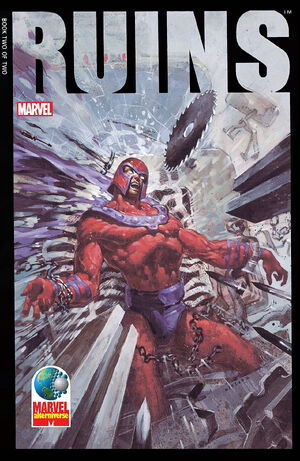 Appearing in "Women in Flight"Edit

Synopsis for "Women in Flight"Edit

Issue two starts with Sheldon sitting on a plane with Mystique, who begins to shapeshift against her will; as she is taken off the plane, a security guard bumps into Magneto, damaging a magnetic dampening device that Magneto had under his jacket to nullify his magnetic powers, which causes every metal object within radius (including the plane) to attach itself to him, killing him and several others. After this, Sheldon visits a special prison wherein many mutants, including several of the X-Men (including Scott Summers, Kitty Pryde, Kurt Wagner and Quicksilver, all of whom have been mutilated and deformed in an effort to control their powers), and is given a tour by the warden, Wilson Fisk who informs Sheldon that the only reason he was allowed to see the prison was because President X knew he was dying, and wanted to grant a dying man his wish. After witnessing a carnival show with Johnny Blaze, who commits suicide by setting his skull on fire as part of a carnival stunt, and interviewing Ben Grimm, who describes the deaths of the rest of those who would become the Fantastic Four and Victor Von Doom when their space ship flew through a cloud of radiation (as Grimm refused to pilot the ship due to safety concerns, Reed Richards hired Von Doom instead), Sheldon decides to begin writing his book (which he will title Marvels). However, he discovers that he has run out of the medication he has been taking; he has been infected with a virus given to him by Peter Parker, who had worked at the Daily Bugle with Sheldon and had attempted to give himself super powers by irradiating a spider and allowing it to bite him, only to die in the attempt. The virus overcomes Sheldon, killing him; as he falls to the ground, his notes are scattered in the wind.

Retrieved from "https://heykidscomics.fandom.com/wiki/Ruins_Vol_1_2?oldid=1716496"
Community content is available under CC-BY-SA unless otherwise noted.