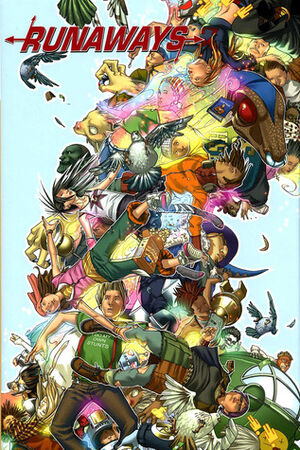 This deluxe hardcover collects Runaways Vol 2 #1-Runaways Vol 2 #18. In True Believers, it's an all-new beginning for the book that Wizard calls "the best original concept from Marvel in thirty years!" When a group of teenagers discovers that their parents are actually super-villains, they run away from home... but that's only step one! Now that the evil Pride is gone, nearly every bad guy in the Marvel Universe is trying to fill the power vacuum in Los Angeles, and the Runaways are the only heroes who can stop them! Plus: What does a mysterious new team of young heroes want with the Runaways, and which fan-favorite Marvel characters are part of this group? In Escape to New York, the Runaways embark on a coast-to-coast adventure, guest-starring Cloak and Dagger AND the New Avengers! When Cloak is accused of a crime he didn't commit by the heroes of New York City, the vigilante is forced to turn to the teenage Runaways for help. This story will take our teens to a place they've never been: NYC! And in Parental Guidance, the villainous Pride returns, but this all-new group isn't made up of the Runaways' evil parents. Who are these shadowy players, and what do they want with the Marvel Universe's next generation of heroes?

Retrieved from "https://heykidscomics.fandom.com/wiki/Runaways_Omnibus_Vol_1_2?oldid=1515442"
Community content is available under CC-BY-SA unless otherwise noted.