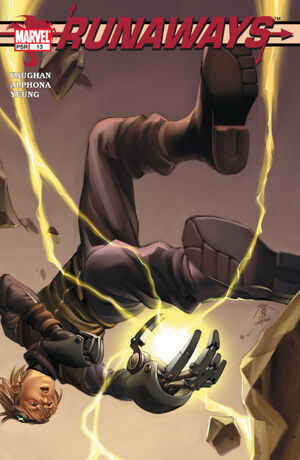 It has been a week and the Runaways have grown tired of waiting for Cloak and Dagger to call the Avengers to arrest their parents. Alex then strides in tell everyone what he has translated from the Abstract so far. Apparently, twenty years ago, their parents were all pulled together by the Gibborim, anthropomorphic gods who desire to return Earth to its original, pure state. To this end, they formed the Pride, whom they instructed to bring the soul of an innocent girl to feed on for every year for the next quarter century, giving them the strength to wipe out humanity. In the duration of this time, they would have the power to secretly control Los Angeles as they see it. Once the Gibborim were rejuvenated, they would choose six members of the Pride to survive the coming Armageddon and rule the Earth eternally, while the rest would perished.

When Karolina asks where do they fit into this, Alex reads that in the third year of the Pride, Janet Stein became pregnant. The Pride, except for the Deans and the Hayes, became intrigued with the idea of having children (the former did not want a child and the latter feared that they could not conceive). Deciding that perhaps their children could take their place in paradise, the Pride agree to tell their offspring of their double-lives when they turn eighteen.

Horrified by this shocking revelation, Molly and Chase suggests that they go to the authorities with this evidence but Alex shoots that idea down, as the LAPD is on the Pride's payroll. As it so happens, a squad of dirty cops, led by Lieutenant Flores, have found them.

Retrieved from "https://heykidscomics.fandom.com/wiki/Runaways_Vol_1_13?oldid=1451292"
Community content is available under CC-BY-SA unless otherwise noted.