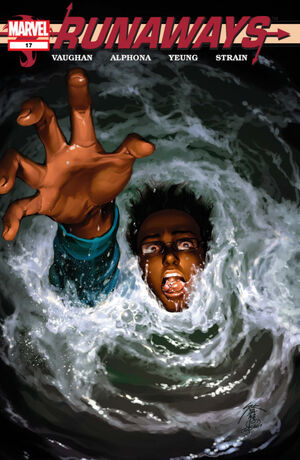 Excuse me...do you kids have a license to drive that thing?

Alex Wilder manages to figure out the spell to unfreeze Nico from her magical stasis. Regaining her senses, she panics upon seeing Alex's parents behind him. But what horrifies her more is that Alex is revealed to be the mole. He explains that he actually discovered the Pride's secret lair a year ago, while looking for presents at the last charity meeting. He was naturally horrified by killing of an innocent girl, but kept his mouth shut instead of calling the cops. He went digging into the Pride's past, searching through their books in his father's subbasement. It during that time that the Deans and the Hayes broke in and ripped out the pages of the Abstract that might detail them betraying the Pride. He even overheard them suggesting to lobotomize the others if they ever got suspicious.

Because he could not go to his parents about this betrayal, he set forth in motion a plan to stop this coup -- by helping the other Runaways unlock their powers and/or gadgets. Though he admits that bringing a vampire to the Hostel wasn't part of his plan. He tries reasoning with Nico to stick to the pact with the Gibborim so that they and their parents can rule a renewed Earth. In response, Nico hits him, stating that she would not be with him even if he was that last boy on Earth. She rushes to Karolina's side, waking her up, before informing her friend that Alex is the mole. Musing that he wasn't right for Nico, Karolina unleashes her solar fury on him. Alex responds by conjuring up chains based off the same metal as her bracelet to bound her. But Gertrude wakes up as well and reclaims her empathic link with Old Lace, who she commands to snatch the Staff of One and return it to Nico. Priming the Fistigons, Alex warns them not to make a move, or he will fry Karolina, though Nico thinks he's bluffing. Then suddenly, Chase, whom Alex thought was injured enough not to recover, crashes through the wall with Leapfrog. Nico capsizes on the distraction to use her magic to destroy the Fistigons. Her parents, priming their magic, insist that she stand down. Unfortunately, the Steins and the Yorkes have regained consciousness, furious at this betrayal. To end the fighting, Molly grabs the container holding the murdered girl's soul in it and crushes it, expelling a powerful light that shoots up through the water.

It is then that the Gibborim arrive, furious that they have not a soul to feast on. Alex steps forward, taking full responsibility for the loss of the soul, at which the Gibborim incinerate him. They then turn their murderous eyes on the Pride, declaring that they and their children shall die for ruining decades of preparation. The Pride band together to hold them off, so that their children can escape. But Nico refuses to leave her parents behind, even after all they've done. But her mother is not giving her a choice. The Runaways quickly get on the Leapfrog and escape before the Gibborim's underwater lair explodes. As they disembark on dry land, Captain America bears down upon them, asking if they have a license to drive.

Retrieved from "https://heykidscomics.fandom.com/wiki/Runaways_Vol_1_17?oldid=1451296"
Community content is available under CC-BY-SA unless otherwise noted.