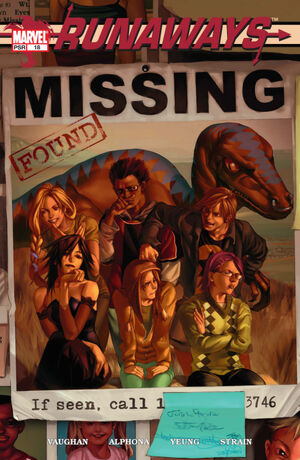 I never thought I'd live to see eighteen. Isn't that dumb? Every day, I look in the mirror and say, What? You still here? Man! Like even today. I woke up this mourning, you know? And the sun was shinning and everything was nice, and I thought...this is going to be one terrific day, so you better live it up boy...because tomorrow, maybe you'll be gone.

-- James Dean - Rebel Without a Cause

Because of the Runaways' defeat of the Pride, the Avengers have stepped in to clean up Los Angeles, starting with a review of the LAPD. But Captain America believes that the Runaways should not have taken matters into their own hands and have them split up, with Old Lace and Leapfrog placed in storage. The Runaways reunite at the James Dean memorial at Griffith Observatory and decide to rescue Old Lace. At the warehouse, they encounter an ambush of robots and the team starts taking them down. One robot pins Nico to the wall and Chase gives her a knife to conjure the Staff of One. Instead, she uses the knife to stab the robot in the eye. Gert reunites with Old Lace and the Runaways steal the Leapfrog back as their getaway vehicle.

Retrieved from "https://heykidscomics.fandom.com/wiki/Runaways_Vol_1_18?oldid=1451297"
Community content is available under CC-BY-SA unless otherwise noted.