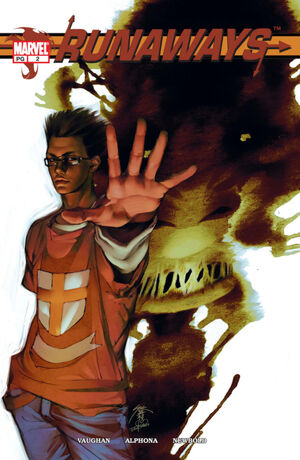 Guess we're on our own.

The issue begins right where the previous one left off; the Pride had just killed a young woman while being spied upon through a secret passage by their children. Having heard a noise coming from behind the two-way mirror, the Pride is torn between thinking it is something/someone sinister or just "psychic residue from the sacrifice",[1] according to Alice Hayes. While Geoffery Wilder sends two members to check his secret catacombs, he sends his wife, Catherine, to check on the children in the game room. The rest of the Pride discusses the possibility that it may have been the children who had found them out. Leslie Dean then mentions that they are "suppose to protect them from all this until they're eighteen", which Tina Minoru says is what the "Abstract dictates."[2]

As Caroline Wilder approaches the game room, she hears commotion, but though alarmed, it appears that the children were just playing a game of Twister. As she leaves, the children stop the ruse and try to discuss what they just witnessed, filling in Karolina, who missed the killing in order to escort Molly back to the game room. Alex Wilder suggests that they try to take their parents out, but the discussion ends when the parents arrive and request two of them, Nico and Alex, to carry a trunk out to the Yorkes' car. While doing so, Alex and Nico ponder whether or not the body of the girl is in the trunk. Alex then resolves to have the other kids to meet later in the evening in order to discuss their possibilities.

At that time, they all meet (except for Molly, who still does not know) at the Griffith Observatory. Alex thinks that they should contact the Los Angeles Police Department and report the murder and is sided with by Gertrude. Chase and Karolina opt to just forget what they saw and chalk it up as a performance piece. The deciding vote comes down to Nico, who sides with calling the police. Alex makes the call after the decision is made, but the cop at the precinct is unbelieving and refers him to the Avengers. Alex then decides the only way to make the police believe is to bring them the body of the girl, now thought to be hidden in the Yorke residence.

At their home, the children explore the basement and discover a keypad hidden behind a painting. Nico notices that the password must include the numbers "3", "4", and "7" since they show wear and Alex suggests, after learning there are also letters, that the password is "Pride". Despite the skepticism from the others, Nico inputs the code and a secret wall slides away to reveal, in the final panel, what appears to be a large, angry looking lizard (later named Old Lace).

Retrieved from "https://heykidscomics.fandom.com/wiki/Runaways_Vol_1_2?oldid=1451281"
Community content is available under CC-BY-SA unless otherwise noted.