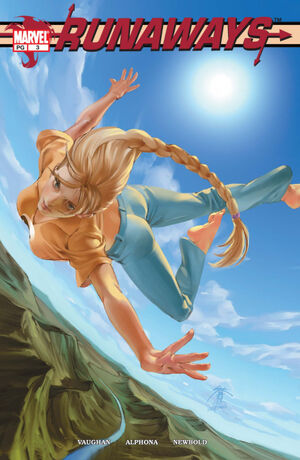 The comic begins with the group of Runaways being confronted with a giant lizard reminiscent of a velociraptor (Old Lace) that was being confined behind a secret passage in the Yorkes residence. The kids contemplate what to do with the watchful beast as Chase Stein takes the initiative and attacks the creature, which retaliates. However, at the command of Gertrude, the creature becomes docile. As the kids ponder this turn of events, a holographic image of the Yorkes materializes and reveals they had left the creature as protection for Gertrude if they had died. Old Lace is a genetically alerted dinosaur from the 31st century, since the Yorkes parents are time travelers.

The group decides to head for Karolina Dean's home, which is empty since her actor parents had gone to New York City. Leaving the dinosaur behind despite Gertrude's pleas to bring it, the kids make their way to the Dean residence. While there, they discover that Karolina's medical alert bracelet has significant meaning. A piece of paper found with a crossed out picture of the bracelet leads Karolina to rip off the trinket in a huff, revealing her to be a luminescent being. The group then contemplates the possibility that Karolina is an alien after she discovers she can fly. The final scenes of the comic show that the detective the kids contacted in Runaways #2 has taken the complaint to his superior, Lieutenant Flores. The comic ends with Flores contacting Alex Wilder's father, the apparent leader of the Pride, to inform him of the possible situation his son has brought about.

Retrieved from "https://heykidscomics.fandom.com/wiki/Runaways_Vol_1_3?oldid=1451282"
Community content is available under CC-BY-SA unless otherwise noted.