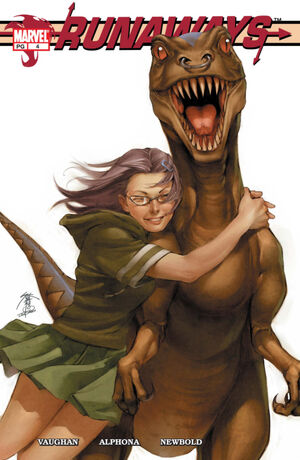 After being alerted by his minion Lieutenant Flores of the LAPD[1] that his son reported a murder[2], Geoffrey Wilder, leader of The Pride, visits Alex's room to discover he is nowhere to be found. Alex is actually at the Dean residence about 11 miles away where Karolina Dean is still reveling in her new found discovery of her alien power to fly.[1] The rest of the group tries to decide what to do with their discoveries. They decide to find and reveal to Molly Hayes, who they had left out until this point because of her age[3], what they have found out about their collective parents. However, Chase Stein persuaded the rest to stop by his home first in case there is anything there that he is meant to receive or learn. As they leave, Gertrude Yorkes senses someone watches but decides to dismiss the fact. She is right, since Old Lace has been following them since they left the genetically altered dinosaur at the Yorke's residence.[1]

The kids arrive at the Stein residence and go to inspect Chases parents' work shed, which turns out to be deceptively small on the outside but large inside. They find a variety of mechanical weapons and experiments before being confronted by the Steins and Minorus. As Chase puts on some robot gloves (fistigons) and X-ray goggles, his father uses a device to subdue him. Alex then removes Karolina's bracelet, unleashing her alien luminescent powers, before they are both attacked by the parents. Nico Minoru's mother tries to stab Nico with the Staff of One, which is absorbed by Nico to her mothers amazement. Old Lace makes an appearance and occupies Mr. Stein while Nico assaults her father, breaking his hold on Karolina, who then shoots a beam of energy at him.

With the Steins and Minorus subdued, the group pile into Chase's van and Karolina drives them towards the Hayes' residence to get Molly. However, on the way Gertrude's phone rings. The comic ends as the Hayes and Yorkes threaten to kill Molly unless the teens surrender.

Retrieved from "https://heykidscomics.fandom.com/wiki/Runaways_Vol_1_4?oldid=1451283"
Community content is available under CC-BY-SA unless otherwise noted.