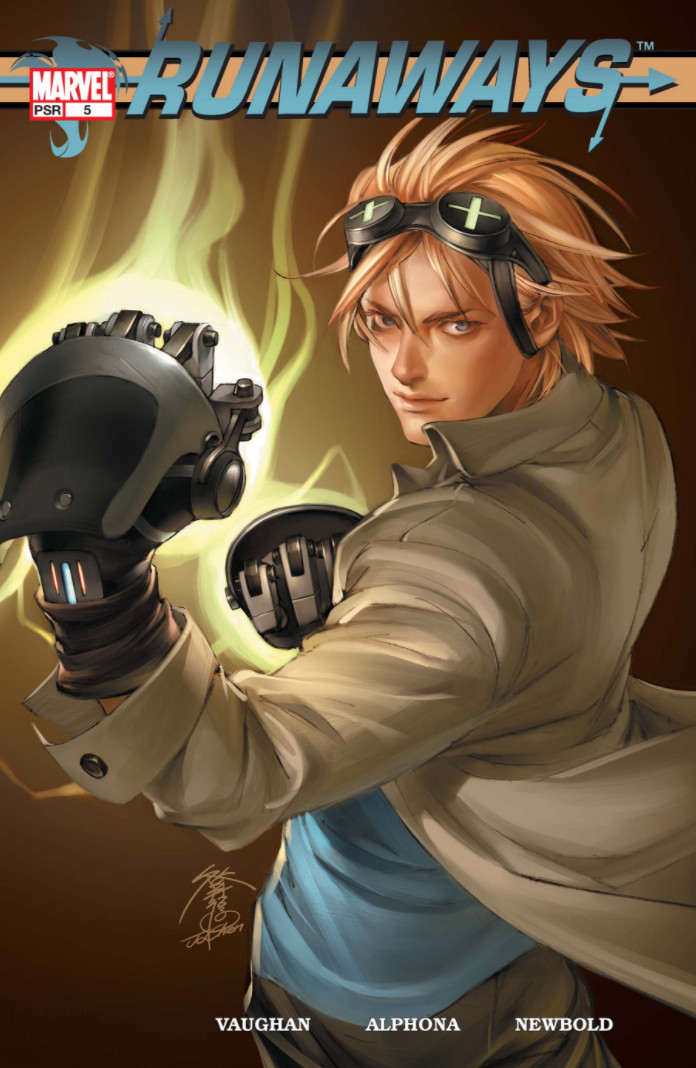 We need to take care of each other now.

The comic begins with the Steins and Yorkes' watching over Molly Hayes as they wait for the rest of the children to show up after the parents had threatened Molly's life.[1] However, Molly starts to come out of the trance. As her mother talks to her, Molly says she hasn't been feeling well and that she had been bleeding. Her mother thinks this has to be due to her hormones and her growing into a woman, so she soothes her daughter back into the trance. The comic then breaks to the teens one the side of the road trying to discuss what to do. In the course of the discussion, Chase unknowingly activates the fistigons he stole from his parents,[1] which shoots a spray of fire. They all decide then to assault the Hayes' residence and extract Molly.

Back at the Hayes residence, Leslie Dean shows up from New York City, though without her husband Frank. Outside, the teens are getting into position with Alex Wilder leading the group through walkie-talkies. He and Nico then discuss the plan, but she ends up kissing him just in case things go wrong. The both then approach the house and ring the doorbell. As Dr. Hayes lets them in, he is attacked from behind by Old Lace. Alex, Nico and Gertrude then try to carry out the rest of the plan but are waylaid by the Yorkes. Nico, who becomes frustrated, lunges at the Yorkes and is cut by a battle ax. Due to the spilled blood, the Staff of One emerges from her body and she takes care of the parents before heading up to Molly's room.

Outside Leslie Dean confronts her daughter and Chase, but Karolina strikes her mother with the bracelet that keeps her alien powers at bay. This in turn also harms her mother and allows Leslie Dean to be knocked out. Back in the home, Nico has confronted Mrs. Hayes but their conversation is cut off when Molly awakens and it dawns on her mother that Molly is showing signs of being a mutant. Nico knocks out Mrs. Hayes with the Staff and Molly then threatens to hurt Nico, ending the comic.

Retrieved from "https://heykidscomics.fandom.com/wiki/Runaways_Vol_1_5?oldid=1493125"
Community content is available under CC-BY-SA unless otherwise noted.