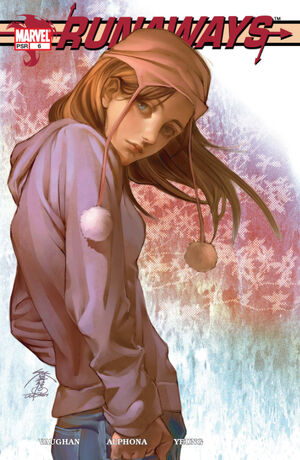 We're fugitives from the entire world.

At the Hayes' residence, Molly is angry at Nico after Nico had knocked Mrs. Hayes out with the Staff of One. Gertrude and Old Lace join them. Molly ends up freaked out about Old Lace while Gertrude is freaked out about Molly being a mutant. Alex comes into the room while Gertrude tries to fill Molly in on what has transpired over the past couple of hours. It turns out that Karolina and Chase had shirked their duties, though, and all of the kids are attacked by Mrs. Dean in Molly's room. She subdues Gertrude, but Molly then becomes angry and hurtles Mrs. Dean out of the house and into the pool.

The kids decide to leave after Nico and Alex go to get Mrs. Dean out of the pool, just in case she might drown. As they remove her, she attacks Nico again, but Alex hits her with the Staff. The van is making its way through downtown Los Angeles with Alex trying to use the ring he swiped from Mrs. Dean to decode the book they stole. It doesn't work because it only translate some of the words. Geoffrey Wilder then calls Alex's cell phone and informs the kids to turn on the radio. A news bulletin has gone out that Alex and the others are wanted in connection with the murdered girl, now identified as Destiny Gonzales, as well as the kidnapping of Molly. Alex hangs up on his father in frustration and Chase suggests they fall off of the radar of everything.

Back at the Hayes residence, the Pride makes a startling discovery. A note was left by one of the kids, pledging their loyalty still to their family. It is unsigned. Meanwhile, the kids have arrived at Chase's hiding spot, Bronson Canyon in Griffith Park, which is a place Chase likes to call The Hostel. The kids then discuss having new names, with everyone choosing one except for Alex, who vows to redeem his for however long it takes.

Retrieved from "https://heykidscomics.fandom.com/wiki/Runaways_Vol_1_6?oldid=1529462"
Community content is available under CC-BY-SA unless otherwise noted.