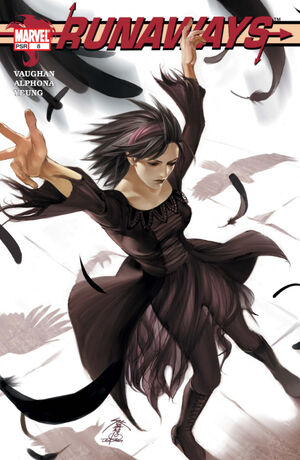 What kind of bad guys are your parents, Topher? Androids? Demons? Android demons?

Alex Wilder welcomes Topher into their team, although Chase Stein does not trust the newcomer. They hear police sirens and flee the convenience store. Nico Minoru casts a smoke spell using the Staff of One to ward off the police, while the Runaways explain their team's origins to Topher.

Geoffrey Wilder tells his wife that one of the Pride's operatives has found surveillance footage of their children fighting a trio of thieves at a convenience store.

The Runaways go to their hideout in Bronson Canyon. Old Lace attacks Topher and Molly Hayes separates the two. Topher meets Molly and Arsenic, and Nico volunteers to give the newcomer a tour of the Hostel. When they leave, Karolina tells her teammates that she does not want Topher to be freaked out that she is actually an alien, instead opting for the mutant approach.

Nico shows Topher her room and explains how she uses the Staff of One. They start a heartfelt conversation about how evil their parents are. Topher starts to move to kiss her, but Nico says she is already in a relationship with Alex. Topher urges her not to be afraid and kisses her. Nico kisses him back, and Alex views the scene in disbelief from the removable eyes a portrait.

Retrieved from "https://heykidscomics.fandom.com/wiki/Runaways_Vol_1_8?oldid=1451287"
Community content is available under CC-BY-SA unless otherwise noted.