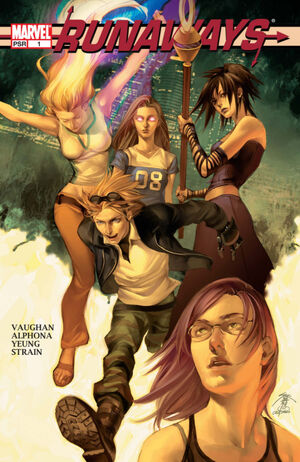 His real name is Victor Mancha. He grew up...here in Los Angeles...Don't trust him. He's not who he says he is...I knew only you guys would understand...His father...is a villain from your time....the greatest evil...in the universe...

Victor Mancha and his friend overhear a police dispatch, advising all units of a masked felony taking place downtown. The Wrecking Crew are robbing a bank, along with a new member, Piledriver’s son, Excavator. They are challenged by the female contingent of the Runaways, who inform them that, if they hand Excavator over, they’ll allow them to be on their way. The Wrecking Crew thinks they’re having a laugh, and a fight quickly breaks out. The Runaways make short work of the felons, but decide to leave Excavator for the cops after all. Gert thinks he’s a lost cause. Elsewhere, the inaugural meeting of Excelsior is taking place. It’s an outreach program that intends to assist teenage superheroes back into normal civilian life. The tutors are former New Warrior, Turbo, and Phil Urich, who briefly assumed the role of Green Goblin. The four assembled youths are Darkhawk, Julie Power, Ricochet and Chamber. As they introduce one another, Turbo takes a call from a mystery benefactor, who tells her that Excelsior will receive a million dollars if they bring in five runaways. Turbo asks them to keep talking. The Runaways return to their new home, under the La Brea Tar Pits Museum. There, the Yorkes’ old time machine begins to rumble, and a woman appears inside it. She claims to be Gertrude, only from the future. She warns of a villain called Victorious who has decimated their future, murdering all their heroes. She asks them to find him in this time, when still a boy called Victor Mancha and before his power becomes too much. She dies from her injuries in Chase’s arms, and Chase suggests they find Victor and rip his heart out.

Retrieved from "https://heykidscomics.fandom.com/wiki/Runaways_Vol_2_1?oldid=1451298"
Community content is available under CC-BY-SA unless otherwise noted.