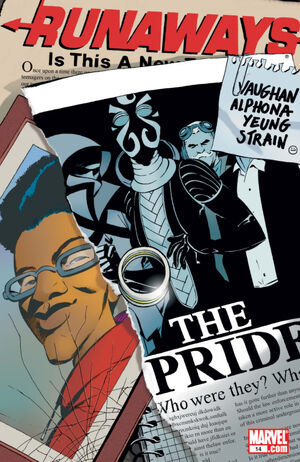 I don't miss him, necessarily. I just miss the way things used to be. Maybe it's just because we were too busy running from our 'rents to notice, but back then, it never felt like there was this cloud hanging over us. I know it seems weird, considering we were routinely fighting vampires and mythical giants, but back when we thought Alex was one of us, things were just...simpler. I mean, I always knew you should never trust your parents, but I was naïve enough to think you could always trust your friends.

Near Tarnax VII, Karolina Dean and Xavin prepare for their wedding. Karolina says she misses her friends back on Earth, and Xavin says he has arranged for their first dance as newlyweds to be the Earth song Lucy in the Sky with Diamonds. The next day on Earth, Nico leads the Runaways. Chase compares her to Alex and Victor wonders who Alex was. Gert explains that he was the team's traitor back when it first formed.

A group of Alex's old Internet pals meet at a bar and discuss Alex's disappearance. Hunter tells them that he hacked into Alex's gaming account and discovered that his parents were members of the Pride. He says Alex left them a file with instructions to bring him back. Months later, they have gathered items from each family of the Pride. Oscar reads from the Abstract to "bring back the one named Wilder," but instead bring back Alex's father, Geoffrey Wilder.

Retrieved from "https://heykidscomics.fandom.com/wiki/Runaways_Vol_2_14?oldid=1535571"
Community content is available under CC-BY-SA unless otherwise noted.