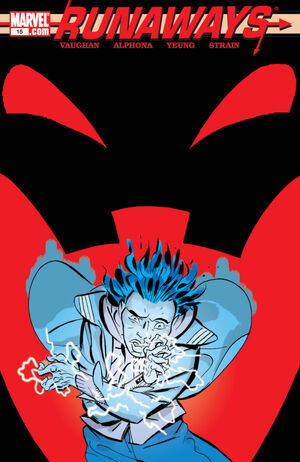 That's the one thing we can't hide, huh? Our roots.

Victor Mancha has a nightmare that Ultron makes him destroy the Runaways. Chase tells him to quiet down so the rest of the team can sleep. The "new Pride" Geoffrey, Stretch, Lotus, and Hunter watch Victor and Chase's conversation by hacking into Victor's cyborg brain. Geoffrey plans on turning the Runaways against themselves by "resurrecting" one more ally.

Gertrude and Old Lace wake Nico up, looking for Chase. Nico says that if anything happens to her, Gertrude she should be the group leader. Molly joins them, Chase and Victor tell them that a supervillain is terrorizing Malibu. When the team goes to investigate, they find Alex Wilder instead. Nico uses the Staff of One to reveal the impostor. Hunter controls Victor, who orders Chase to knock him out. Lotus reveals that Nico and Chase kissed, which infuriates Gert. The Pride kidnaps Molly while Nico and Gertrude argue.

Retrieved from "https://heykidscomics.fandom.com/wiki/Runaways_Vol_2_15?oldid=1451312"
Community content is available under CC-BY-SA unless otherwise noted.