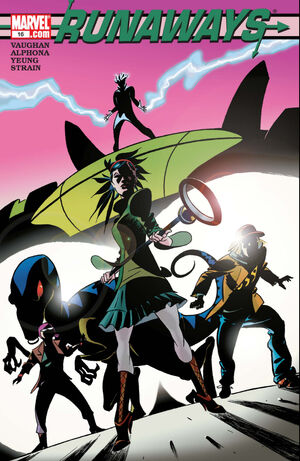 Man, I am so tired of fighting. Why can't we all just get along?

Tatiana and her father work at the Griffith Observatory and detect a bright light in the same part of the galaxy where Tatiana detected a crazy version of "Lucy in the Sky with Diamonds." The Runaways figure out that Alex's impersonator was actually a younger version of his dad. They go back to the Hostel under the La Brea Tar Pits to fix the Leapfrog. Gert tries to break up with Chase.

Geoffrey brings the new Pride to Randy's Donuts to speak to a "higher authority": the Gibborim. Nico casts a spell to find how the Pride has been spying on them. She and Gert get ready to kick Victor out of the team. Chase stands up for him, and the team starts to fight. In the middle of the fight, Karolina and Xavin return to Earth and interrupt them.

Retrieved from "https://heykidscomics.fandom.com/wiki/Runaways_Vol_2_16?oldid=1451313"
Community content is available under CC-BY-SA unless otherwise noted.