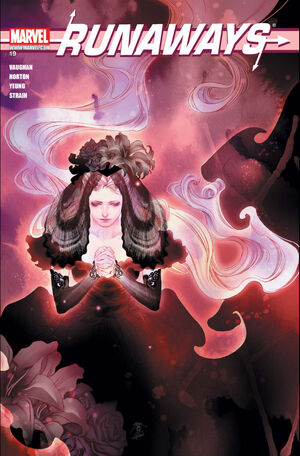 See after Gert got killed...our Gert...Chase and Old Lace kinda ran away. We don't know if they're ever coming back.

The Runaways are coping with Gert's death in different ways. Nico and Victor begin a relationship, Molly asks the Leapfrog if Gertrude is in Heaven, and Karolina and Xavin begin to discuss the subject of death. Meanwhile, a former policeman who had been responsible for investigating the Pride sells a talisman owned by them to an elderly shopkeeper. The shopkeeper becomes a monster and rampages through Los Angeles, especially Starbucks shops. The kids then head out to stop it.

Retrieved from "https://heykidscomics.fandom.com/wiki/Runaways_Vol_2_19?oldid=1451316"
Community content is available under CC-BY-SA unless otherwise noted.