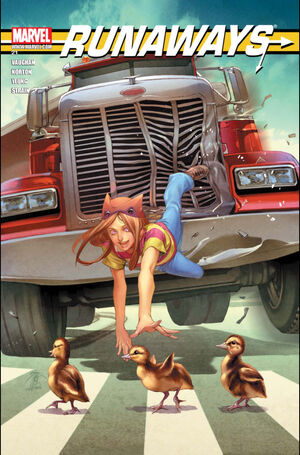 I know, girl. That's why I tore out a few pages first. Yeah, I won't forget. "The offer stands."

The team continues to battle the monster, but all of their attacks fail. Xavin and Nico finally team up to take down the monster. Xavin takes the form of the shopkeeper's dead wife and Nico casts a spell to give Xavin her voice. They talk down the monster, who reverts back to his normal self. Chase finally meets up with his friends at the Hostel.

Retrieved from "https://heykidscomics.fandom.com/wiki/Runaways_Vol_2_21?oldid=1451318"
Community content is available under CC-BY-SA unless otherwise noted.