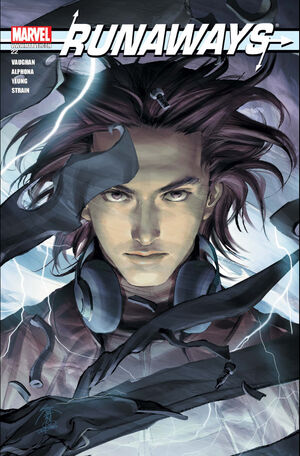 I've actually been to war. How was I outflanked by a child?

Chase learns from the Gibborim that the time in which he can resurrect Gert is short. He tells Nico that he is going to sacrifice himself to resurrect Gert and shuts down Victor. He then takes the Staff of One and, alongside Old Lace, leaves the Hostel. Molly hears a voice telling her about Chase's plan and she alerts the others, following a urine trail Old lace left for them.

Retrieved from "https://heykidscomics.fandom.com/wiki/Runaways_Vol_2_22?oldid=1451319"
Community content is available under CC-BY-SA unless otherwise noted.