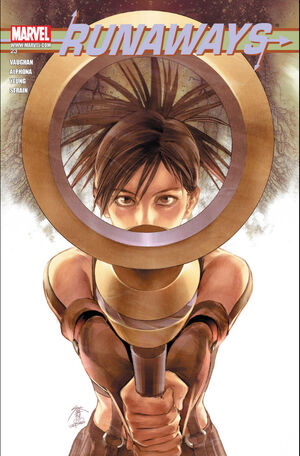 I believe your people call it "girl power".

The team tracks down Chase, whose self-sacrifice has been rejected by the Gibborim. When the Runaways appear, the giants move to take Nico instead. Victor regains consciousness and he and Molly enter the Gibborim's realm and save Nico by using a Fastball Special. The Gibborim finally fade from reality without their sacrifice. The team heads back to the Hostel.

Retrieved from "https://heykidscomics.fandom.com/wiki/Runaways_Vol_2_23?oldid=1451320"
Community content is available under CC-BY-SA unless otherwise noted.