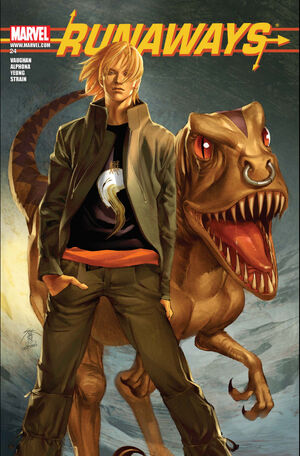 Appearing in "Live Fast, The End"Edit

Synopsis for "Live Fast, The End"Edit

The Runaways return to the Hostel, where they see that one of their security robots has been destroyed. Xavin then realized that he didn't make the team invisible when they left the tar pits. The team is then confronted by Iron Man and a group of S.H.I.E.L.D. Cape-Killers, who say that they are under arrest. The team escapes and heads for New York, vandalizing state signs on the way. Meanwhile, in another reality, the Gibborim come face-to-face with Alex Wilder, who alerted Molly to Chase's plans.