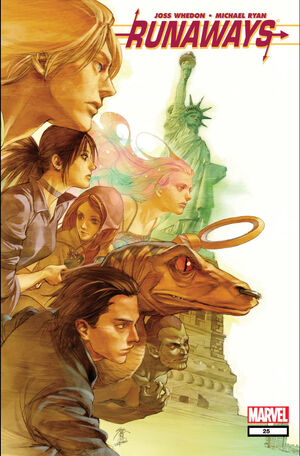 The kids make it to New York City, and arrange a meeting with Wilson Fisk, the former Kingpin. Fisk tells the teens that he will offer them protection and lodging from the government if they steal a mystical artifact for him. The members of the team have some trouble accepting the fact that they are working for Fisk, but they still decide to steal the artifact. The team succeeds in taking the artifact from it's vault, but as they head out, they are confronted by the Punisher, who is followed by a winged monster. They then begin a three-way battle.

Retrieved from "https://heykidscomics.fandom.com/wiki/Runaways_Vol_2_25?oldid=1730277"
Community content is available under CC-BY-SA unless otherwise noted.