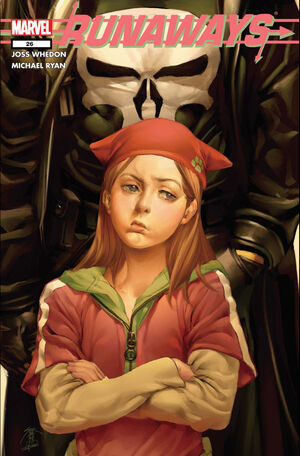 Oh, there's definitely a question...but I don't think it's "where"

The Runaways, the Punisher, and the winged monster engage in a fierce battle on the rooftops. After some time, the Runaways escape the fight and make their way back to their apartment. The team then decides not to give the artifact to Fisk, but they are then attacked by him and an army of ninjas. A battle ensues. During the battle, Victor is thrown off the building, but is saved by the winged monster, who says that Victor has a message to deliver. Nico is cut severely, but uses the Staff of One to render the ninjas comatose. The team then escapes to the Leapfrog and plug the artifact in. Next thing they know, the Leapfrog hits the ground. Chase and Victor disembark to investigate the area. But they soon find that they are not in their time.

Retrieved from "https://heykidscomics.fandom.com/wiki/Runaways_Vol_2_26?oldid=1451323"
Community content is available under CC-BY-SA unless otherwise noted.