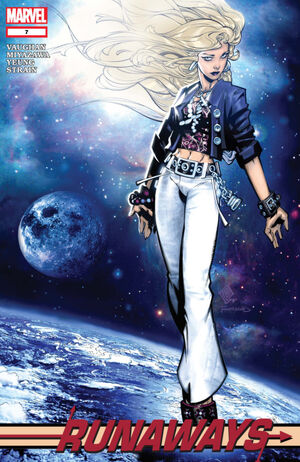 The Runaways battle Swarm, claims his rule over the city. When Nico tries casting a fumigation spell, she accidentally teleports her and Karolina outside of Los Angeles because she already used the spell before. Victor Mancha uses his powers to disrupt the electrical impulses that Swarm's bees use for communication. With the Runaways low on supplies, Nico tells the team to go shopping for an hour, avoiding shoplifting if they can.

Molly tries to convince Victor to buy the Chocolate Frosted Sugar Bombs, but Victor resists. Skrull prince named Xavin who demands that Karolina agree to marry him to settle a dispute between their races. Karolina refuses and a battle breaks out.

Retrieved from "https://heykidscomics.fandom.com/wiki/Runaways_Vol_2_7?oldid=1451304"
Community content is available under CC-BY-SA unless otherwise noted.