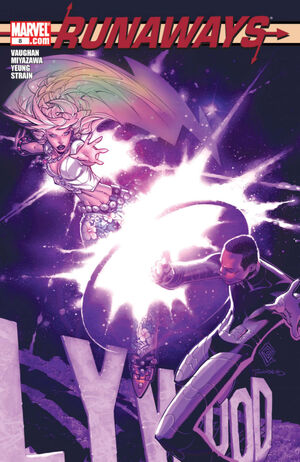 The Runaways overpower Xavin in a battle. Xavin continues pursuing them and tells Karolina to hear him out on the Capitol Records Building. He realizes that he can not make her marry him, but says that he believes that it will end as a long dispute between their two alien races. Karolina reveals that she likes girls, so Xavin shapeshifts into a female form. Karolina then agrees to join him, and the two leave Earth.

Retrieved from "https://heykidscomics.fandom.com/wiki/Runaways_Vol_2_8?oldid=1451305"
Community content is available under CC-BY-SA unless otherwise noted.