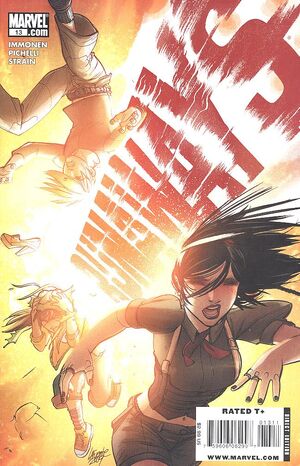 It’s the end of the Runaways’ California dreamin’ as they attempt to make their escape from Klara’s chlorophyll lockup…only to be denied by heavily armed outside forces who are about to foreclose on the property in a big way! Chase finally tells the truth about a violent event in his past. And when the kids have no choice but to turn to Hunter Stein to find a way out of this mess, he reveals a Malibu Beach House secret they never would have guessed. But it’s not easy sailing because Chase is about to make a unilateral decision that looks a lot like...murder?!

Retrieved from "https://heykidscomics.fandom.com/wiki/Runaways_Vol_3_13?oldid=1451340"
Community content is available under CC-BY-SA unless otherwise noted.