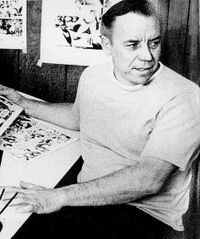 Russell Manning (1929-1981) was an American comic book artist who created the series Magnus, Robot Fighter and illustrated such newspaper comic strips as Tarzan and Star Wars. He was inducted into the Comic Book Hall of Fame in 2006.

Manning studied at the Los Angeles County Art Institute, and later, during his Army service in Japan, drew cartoons for the newspaper at his military base.

In 1953, he went to work for Western Publishing and illustrated stories for the wide variety of comics published by Western for Dell Comics, and later for Western's own Gold Key Comics line. His first notable work was on Brothers of the Spear, a backup feature, created by Gaylord DuBois in the Tarzan comic book. He also drew a few Tarzan stories. He created Gold Key's Magnus Robot Fighter in 1963 and drew the first 21 issues, through 1968.

From 1965 to 1969, Manning drew Gold Key's Tarzan series. During this time, he adapted ten of the first eleven Tarzan novels written by Edgar Rice Burroughs, from scripts written by Gaylord DuBois. (The adaptation of the sixth, Jungle Tales of Tarzan, also scripted by DuBois, was drawn by Alberto Giolitti rather than Manning). In 1999, the first seven of these were reprinted in three graphic novels by Dark Horse Comics as Edgar Rice Burroughs' Tarzan of the Apes (Tarzan of the Apes, Return, Beasts, and Son of Tarzan), Edgar Rice Burroughs' Tarzan — The Jewels of Opar, and Edgar Rice Burroughs' Tarzan The Untamed (Tarzan the Untamed and Tarzan the Terrible). Manning's remaining adaptations, not reprinted by Dark Horse, were "Tarzan and the Golden Lion" Tarzan and the Ant Men and Tarzan, Lord of the Jungle. He did not do the finished art for the latter, but provided lay-outs for parts of the story. Manning also drew the Korak stories in the first 11 issues of Gold Key's Korak comic (also written by DuBois).

From 1969 to 1972 he did the Tarzan daily newspaper strip, and stayed on the Sunday page until 1979. He also created four original Tarzan graphic novels for European publication. Two of them have recently been reprinted by Dark Horse Comics in a single trade paperback collection (Tarzan in The Land That Time Forgot and The Pool of Time) (ISBN 1-56971-151-8). During that period he used assistants, among them William Stout, Rick Hoberg, Mike Royer, and Dave Stevens.

Magnus, his and Gold Key's best-known heroic-adventure series, was set in the year 4000, which Manning depicted as clean, airy cityscapes populated by shiny robots, handsome men and beautiful women. In an era when many science fiction illustrations showed interstellar spaceships with antique-looking fins reminiscent of V-2 rockets of World War II, Manning offered more exotic craft. His Magnus work is being reprinted in hardcover 'archive' editions by Dark Horse Comics with a different color palette.

His final major work was writing and drawing the Star Wars newspaper strip in 1979-80. This work has been collected by Dark Horse Comics as Classic Star Wars: The Early Adventures (ISBN 1-56971-178-X), which omitted the fact that Manning only drew some of the episodes that were written by Steve Gerber and Archie Goodwin. He died December 1, 1981.

The Russ Manning Most Promising Newcomer Award, which is presented annually at Comic-Con International during the Eisner Awards, is named after him.

Retrieved from "https://heykidscomics.fandom.com/wiki/Russ_Manning?oldid=157688"
Community content is available under CC-BY-SA unless otherwise noted.