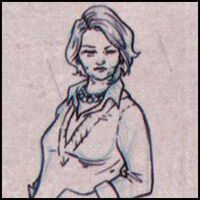 Ruth Smith was the wife of Marine Omega who was murdered by a shape shifting robot who then took her place. Michael never noticed that his wife of so many years had been replaced by an impostor, who then attempted to slowly poisoned him to death. However, her plans were foiled by Eve White which caused the robot to crush his heart and made it look like a heart attack.

Retrieved from "https://heykidscomics.fandom.com/wiki/Ruth_Smith_(Supurbia)?oldid=1658264"
Community content is available under CC-BY-SA unless otherwise noted.