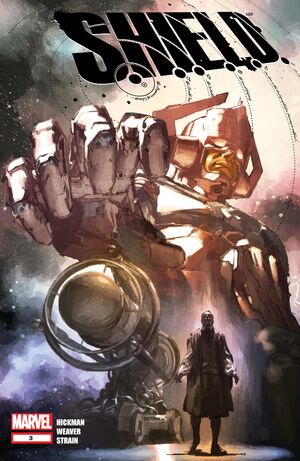 For a thousand years, the Brotherhood of the Shield had a rallying cry: 'This is not how the world ends.' It was posturing...defiance. A thing of hope and promise. A statement about the potential of man. I alone know better because I know exactly when the world will end. For I possess the silent truth. I am Isaac Newton. Some men call me brother...you will call me master.

Appearing in "The Theory of Eternal Life"Edit

The surprise hit of the year marches on! In this issue, discover the secrets of Sir Issac Newton, see how Galileo defeated Galactus long before the Fantastic Four ever did and find out why Leonardo da Vinci traveled over 400 years to do. All of this from the twisted minds of writer Jonathan Hickman (FANTASTIC FOUR) and superstar in the making Dustin Weaver (X-MEN LEGACY)!

Retrieved from "https://heykidscomics.fandom.com/wiki/S.H.I.E.L.D._Vol_1_3?oldid=1451669"
Community content is available under CC-BY-SA unless otherwise noted.