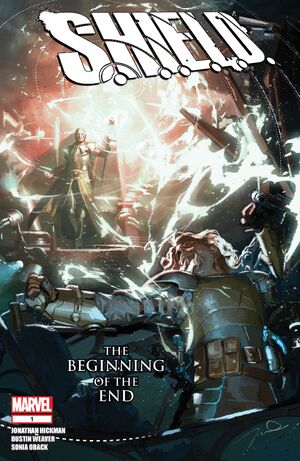 The battle being fought is between men who believe that they can choose their future and those who believe they cannot. ... And it's time you learned da Vinci and Newton are both wrong. It's time you learned they are both right. You have been looking for a third way, Leonid...this is it.Time is not linear. There is no great cause and effect. There is no final destiny. We must live our lives...in between. Look now, Leonid... Look! It is what you have been waiting for... It is what has always been coming... It is hope.

The most acclaimed book of 2010 is back in 2011! The second volume of S.H.I.E.L.D. has arrived and Jonathan Hickman (FANTASTIC FOUR) and Dustin Weaver (X-MEN) are making the second volume of S.H.I.E.L.D. even better than the first! In this issue, the secret history of Michelangelo. He has been pulling the strings for years and is now becoming the prime mover. Can he keep Da Vinci and Newton from killing each other and destroying the Brotherhood of the Shield? Don’t miss this new start of the book that everyone is talking about!

Retrieved from "https://heykidscomics.fandom.com/wiki/S.H.I.E.L.D._Vol_2_1?oldid=1451673"
Community content is available under CC-BY-SA unless otherwise noted.