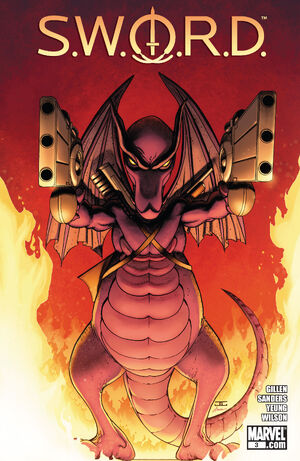 In her own cell, Abigail Brand urges Beast not to break her out and instead focus efforts on stopping Gyrich's insane plan to purge all aliens off Earth. Beast catches up with Gyrich to tell him his purge isn't a good idea. Gyrich counters that among the years they've worked together, he always had the best of intentions. As he walks away, Beast yells that he's been wrong all the time. Beside him, an imprisoned Karolina Dean pleads not to be sent back to her people, for they can't find out that she's still on Earth. Beast tells her that he can't make things worse.

Gyrich reaches the launch bay, remarking that the superheroes believe that the universe is full of nice people. He then asks his aide for a report. She tells him with their strained resources, they'll be running a skeleton crew. Also, there's a problem with Lockheed...

At the moment, a S.W.O.R.D. squad is attempting to subdue Lockheed, demanding that he put on his muzzle. Instead, the dragon breathes smoke and fire before escaping into the vents. He reaches Beast, who was just contacted by Cypher that S.W.O.R.D. had captured Warlock.

Up in the Peak's maximum-plus security brig, Beast questions Unit, while playing chess, if he had been helping both Brand and Gyrich. The reason why is because Warlock was immobilizes by a strange form of technology while also broke Death's Head's stealth field. Unit admits that billions of years ago, his creators planned on spreading their prosperity to the rest of the universe, but they were destroyed by those who rejected them. So he's continuing in their place, especially with divided loyalties.

S.W.O.R.D. then begins to capture the Warbound on Earth and Brand's half-brother at Jupiter, while at the same time, they arrest Beast, who was betrayed by Unit. However, Lockheed sabotages the life support. At the time, Beast, who was being escorted with Brand, reveals he had life-support goo hidding in a fake body cavity he was wearing, before he flings the capsules. Then, a explosion caused by Death's Head, flings everyone out the window, before the Death's Head retrieves them.

Gyrich hears of this and orders any alien agents to be arrested. However, his aide tells him that Metroliths have turned up in Mount Rushmore. Both Gyrich and Brand know that H.A.M.M.E.R. will be sent to deal with them. The latter fears that the aliens would be killed, so she urges a return to Earth.

Retrieved from "https://heykidscomics.fandom.com/wiki/S.W.O.R.D._Vol_1_3?oldid=1643844"
Community content is available under CC-BY-SA unless otherwise noted.