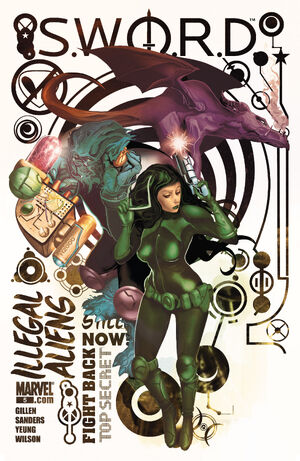 With Agent Brand imprisoned, all hell breaks loose! Norman Osborn and the Dark Avengers set out to destroy a group peaceful aliens while a war-like race is about to unleash the most intelligent and dangerous being in the universe! Now Brand herself is about to walk in a trap that could spell the end of everything she’s worked for…and her life!

Retrieved from "https://heykidscomics.fandom.com/wiki/S.W.O.R.D._Vol_1_5?oldid=1749401"
Community content is available under CC-BY-SA unless otherwise noted.