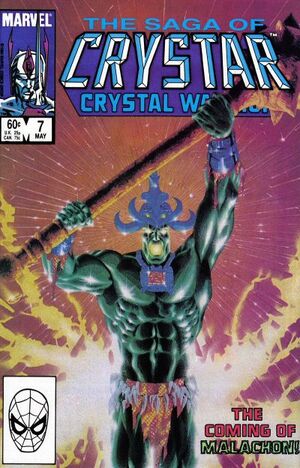 It's called a ship. It floats on water.

The origin of Malachon! So far, he's been a neutral enemy of both the molten and the crystal peoples— now find out why he's leading a savage group of fighters in a brutal attack against Galax! And find out why Crystar must defend—or die! Plus— a special behind-the-scenes look at Order's realm, where both Ogeode and Ika hail from!

Retrieved from "https://heykidscomics.fandom.com/wiki/Saga_of_Crystar,_Crystal_Warrior_Vol_1_7?oldid=1451732"
Community content is available under CC-BY-SA unless otherwise noted.