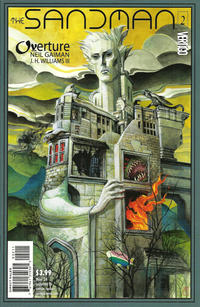 In the throne room of The Dreaming, we are no longer in a flashback. It is "now" or present day: after the death of Morpheus, whereupon the identity and responsibilities of Dream were assumed by the being formerly known as Daniel Hall.

A delegation of metaphysical beings is waiting to pay Dream homage, but he tells Lucien that a commitment has come up and he must postpone the meeting. He immediately reappears on Earth, in London, and locates Mad Hettie sleeping on the street. She only knows Dream as Morpheus and does not recognize him in his Daniel aspect.

Dream takes Hettie to a dream version of the asylum where, in the 19th century, she had been commited for post-partum depression and forgotten. Upon her arrival as an inmate, Hettie had had hidden a watch there, which she claims to have pickpocketed in a West London slum. Despite Hettie's insistance that the watch is worthless and doesn't even work, Dream assures her that it does after its own fashion. He thanks her and leaves, reappearing to apologetically receive his guests in the Dreaming.

Meanwhile, back in 1915, Morpheus confronts the multiple other versions of himself. They opine and debate about why they have all been called to the same place, as well fussing over technicalities and such minute points of order that Morpheus wonders out loud "am I always like this?"

One of them suggests that a facet of Dream must have been removed from existence without orderly transfer to a new one. Since the universe will not allow a vacuum to exist in the absence of one of the Endless, they have all been summoned collectively: first, to fill that void, second, to pool their collective knowledge and powers to find a more permanent solution.

Meanwhile, Morpheus mentions that some of the Dreams seem to be vanishing.

The oldest version of Dream (hinted to be the Dream of the Lovecraftian gods) states that he knows what is going on and why: "the Universe has lived too long. It is time for it to end." He makes some cryptic remarks about something waiting in the darkness that is now waking; of universal cosmic laws; and that they are the heirs of Night and Time. He disappears mid-sentence.

The Dreams deduce that each one of them perceives all of the others as disappearing, and will soon find itself the only entity present. Once incorporated, they agree the next step will be to consult "the First Circle".

Dream activates his ruby and uses it to make contact with an entity that calls itself Glory of the First Circle. Using the analogy of human brain cells and cancer, it tells him that a star has gone mad, setting off a chain reaction that will end the universe. He also informs Dream that it is his fault, referencing the dream-vortex that preceded Rose Walker.

There is a brief cut to a woman seemingly made of darkness and galaxies, who bathes in a pool while singing to herself. A casual hint is dropped that she is a member of the Endless unknown to us until now. She seems alternately indifferent to the pending destruction of the universe, and welcoming the outcome.

Morpheus prepares for the next step of his journey. All of the other Dreams have disappeared, presumeably reincorporated, except the Dream of the Cats, who "doesn't like being told what to do, not even by the Universe." As they prepare to leave together, the cat casually asks Morpheus whether he thinks their father will be pleased to see them.

Retrieved from "https://heykidscomics.fandom.com/wiki/Sandman:_Overture_Vol_1_2?oldid=1456766"
Community content is available under CC-BY-SA unless otherwise noted.