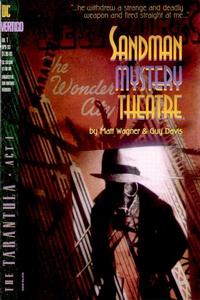 When heroes are clowns who jump, run and hop – no honour in service ne'er doctor nor cop.

Appearing in "The Tarantula (Act I of IV)"Edit

Synopsis for "The Tarantula (Act I of IV)"Edit

1938
District attorney Larry Belmont engages in an argument with his daughter, Dian. Mr. Belmont doesn't want his daughter going out for the evening, but Dian reminds him that she is an adult now, and not a little girl any longer. She storms out of the house and he retreats to his study. Inside, he finds the Sandman skulking about the office. The Sandman douses him with a blast of sleeping gas and leaves the brownstone.

Dian meanwhile goes to a jazz club where she meets her friend, Catherine van der Meer. After several hours of drinking and dancing, they take a taxi home.

That evening, Wesley Dodds, recently returned from abroad, attends a fundraising campaign where he meets district attorney Belmont and Dian. He also meets his father's old friend, retired judge Thomas Schaffer. Mr. Belmont learns that somebody has abducted Catherine van der Meer. The kidnapper left a calling card, referring to himself as the Tarantula. Wesley shares a taxi home with the judge, who informs him of the kidnapping. Wesley then races back to his manor to investigate the matter as the Sandman.

After spying on the Goldmans for a short time, Wesley pays a visit to the Belmonts. When Wesley leaves, Mr. Belmont informs his daughter of the kidnapping, and how there's now a second victim involved. Later that evening, judge Schaffer drops by to talk with Wesley at his home. He informs Wesley about the second kidnapping.

The next day, Dian goes to the police station, and as she steps into the station's restroom, she finds the Sandman.

Retrieved from "https://heykidscomics.fandom.com/wiki/Sandman_Mystery_Theatre_Vol_1_1?oldid=1519129"
Community content is available under CC-BY-SA unless otherwise noted.