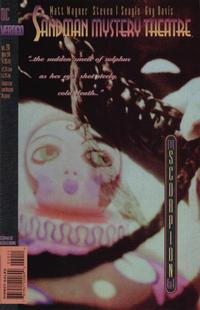 Well, Hell's Bells. My two favorite nutcases in one room together.

Appearing in "The Scorpion: Final Act"Edit

Synopsis for "The Scorpion: Final Act"Edit

Over the course of this 4-issue story-arc, set circa 1938-July : The Sandman defeated disaffected Texas oilman Terry Pritchard dba Terry Stetson dba The Scorpion, who was murdering the senior management of the company that employed him, with a poison-treated bullwhip. Terry the Scorpion Pritchard was gassed senseless and left for the police, trussed up with his own bullwhip.

Retrieved from "https://heykidscomics.fandom.com/wiki/Sandman_Mystery_Theatre_Vol_1_20?oldid=1509081"
Community content is available under CC-BY-SA unless otherwise noted.