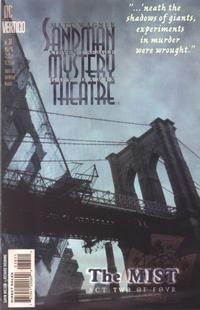 Excuse me, but I couldn't help overhearing your discussion about the conference... that's what I'm in town for, myself. My name's Ted Knight. My father is Daniel Knight? Of Opal City?

Appearing in "The Mist: Act Two"Edit

Synopsis for "The Mist: Act Two"Edit

While on board a cruise ship home, Dian Belmont notices a floating body out on the water. When she and Wesley dock, they learn that saboteurs have blown up a civilian German cargo ship. The survivor she had spotted earlier is alive. He's taken into FBI custody and questioned, about any potential Nazi involvement.

Later, Wesley reads about another sabotage that took place. This time, a private plane crashed. He believes there is a link between it and the cargo ship incident and informs Dian that he's going to investigate. [There is indeed a link; an enemy of George Cohen's had been aboard that plane, and Cohen's new enforcer Jonathan Smythe had laid a delayed-action disintegrating whammy on the plane.]

The Sandman begins his investigation by paying for the release of the cargo ship survivor held in custody. His second step is to visit the airfield, after hours, for clues. While there, he takes out a noisy security guard and retrieves some wreckage. When he examines the plane's damaged parts, he notices no signs of an explosion, or stress fractures, just smooth surfaces around the edges of the remaining components. It was as if a piece of the plane had vanished in thin air, causing a mysterious hole in it. He'll figure it out, and in case he needs any help, soon Wes Dodds meets Ted Knight, a young scientist applying for a grant to perfect the alloy needed to collect his newly discovered cosmic energy.

Meanwhile Smythe has been bullied to the point of retaliating, and undertakes a personal vendetta against his racketeer bosses Cohen and Weiss. But first he whacks his landlord, whose car he irradiates, and who isn't seen again after the resulting crash. Next he disintegrates one of Cohen's henchmen.

To be continued next issue.

Retrieved from "https://heykidscomics.fandom.com/wiki/Sandman_Mystery_Theatre_Vol_1_38?oldid=1456591"
Community content is available under CC-BY-SA unless otherwise noted.