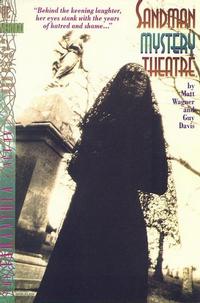 I am the Sandman. And none can escape my dark dreams.

Appearing in "The Tarantula (Act IV of IV)"Edit

Synopsis for "The Tarantula (Act IV of IV)"Edit

Lieutenant Burke and a team of detectives arrive at the Goldman residence. Celia Goldman is missing, an apparent victim of the Tarantula. Although Albert is visibly distraught by the news, Miriam acts catty in his presence. Roger loses his nerve and makes an outburst before storming out of the room. From outside, the Sandman climbs upon a trellis and spies on the entire meeting.

That evening, Burke and his men get a bead on the Sandman's whereabouts. They engage in a high-speed chase with him down the highway, but the Sandman eludes capture. He detaches the fender of his car, which contains an interior row of barbed spikes. Burke's car runs over the spikes and skids into another car.

The Sandman drives to the home of Myron Fields, a former accountant employed by Albert Goldman. Under pressure, Fields reveals that Albert's son Roger is the former owner of the Evergood Milk Company. Albert left him the failing company as his sole inheritance, much to the chagrin of both Roger and his mother. All of Albert's other assets are to go to his daughter/lover, Celia. The Sandman begins to suspect that Roger may be the Tarantula.

The Sandman then pays a visit to the Belmont residence. He surprises Larry Belmont in his study and tells him to begin investigating the Goldman family. Larry has always suspected that Albert Goldman never truly reformed after the prohibition laws were repealed, but he never guessed that they could be involved in the Tarantula kidnappings.

In a darkened dungeon, the Tarantula and the veiled woman inspect their captured prey. Catherine van der Meer hangs practically lifeless from a row of pipes. Next to her, Celia Goldman finds herself similarly chained. The veiled woman picks up an axe. She is prepared to kill Catherine in order to terrorize Celia even further.

The Sandman suddenly arrives and distracts her from making the killing blow. The axe flies into an electrical box, and several live wires spill out onto the damp floor. The veiled woman turns her attack against Wesley, but he knocks her out with a blast of sleeping gas. He removes her veil to reveal the face of Miriam Goldman. Suddenly, Roger Goldman – the Tarantula, enters the room and points a gun at the Sandman. As the two argue, the Tarantula takes a step backwards into a puddle of water. Celia Goldman manages to push the exposed electric wires with her foot into the puddle, electrocuting her brother. Miriam Goldman revives and attacks Wes, but he knocks her out with the butt end of the axe.

The following day, Wes has dinner with Larry, Dian and Judge Schaffer. He learns that Catherine did not sustain any permanent damage, and will recover from her trauma. After dinner, Wes walks Dian out to her car. It becomes apparent that they will be seeing more of each other in the future.

Retrieved from "https://heykidscomics.fandom.com/wiki/Sandman_Mystery_Theatre_Vol_1_4?oldid=1456550"
Community content is available under CC-BY-SA unless otherwise noted.