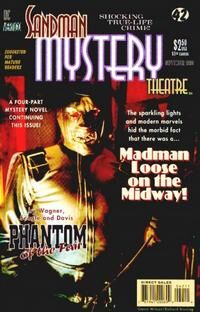 Besides, you know my methods, Lt. Burke. I'm a ghost. I'll be around, but you won't know it. If you carry the case, I'll fade away. But if you miss something, I'll find it. Simple as that.

Appearing in "The Phantom of the Fair Act Two"Edit

Synopsis for "The Phantom of the Fair Act Two"Edit

Someone is torturing, and then killing, men at the New York World's Fair. Lt. Burke assigns himself to the case and discovers that the victims were homosexuals. Wesley Dodds and Dian Belmont see the lieutenant snooping around the fairgrounds, and they begin their own investigation. Meanwhile, the fairgrounds owner hires his own detective -- Jim Corrigan.

Retrieved from "https://heykidscomics.fandom.com/wiki/Sandman_Mystery_Theatre_Vol_1_42?oldid=1456595"
Community content is available under CC-BY-SA unless otherwise noted.