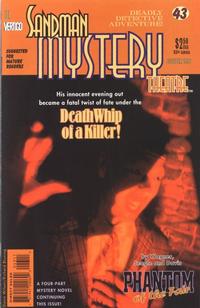 You ever wonder what "crimson" in Crimson Avenger stands for?

-- The Crimson Avenger as he points a gun at a thug.

Appearing in "The Phantom of the Fair Act Three"Edit

Synopsis for "The Phantom of the Fair Act Three"Edit

Someone is torturing, and then killing, men at the New York World's Fair. Lt. Burke assigns himself to the case and discovers that the victims were homosexuals. Wesley Dodds and Dian Belmont see the lieutenant snooping around the fairgrounds, and they begin their own investigation.

Sometime later, the Sandman steals some maps to the fairgrounds and believes the killer is sneaking onto the premises via a nearby sewer tunnel at the lake. As he explores the area around the lake, he accidentally stumbles upon another altercation all together -- The Crimson Avenger having a shootout with some local thugs.

Meanwhile, a male friend of Wesley Dodds meets another man at a gay bar. The two hit it off and head out together. The killer has found his next victim.

Retrieved from "https://heykidscomics.fandom.com/wiki/Sandman_Mystery_Theatre_Vol_1_43?oldid=1456596"
Community content is available under CC-BY-SA unless otherwise noted.