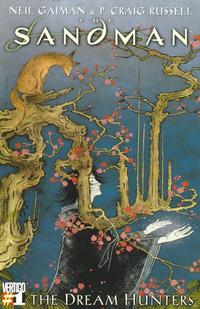 It was unquestionably true that the fox was in love with the young monk. And that was to be the cause of much misery and heartbreak… And of a strange journey.

A young monk lives alone, near a temple on a mountainside. A Fox and a Badger see the monk, and decide to make a wager: whoever drives him out will keep the temple as their home. That night, a man on a horse appears, telling the young monk that the emperor has called him and he should leave at once to claim his new position and the riches that come with it. He is also told that if he refuses, the emperor will issue a death warrant. However, the clever monk realizes that it is the Badger playing a trick. The next day, during a terrible storm, the young monk discovers a beautiful , young lady outside in desperate need of assistance. She claims to be the only daughter of the governor of the province of Yamashiro. She says that she was traveling alone to the monk’s temple when she and her party were attacked. She alone escaped. She tells the monk that she overhead the bandits responsible say that they were going to burn the temple to the ground, and that they must flee immediately. Once again, the clever young monk recognizes this to be a ruse – this time by a fox. Discovered, the young lady reverts into her fox form and takes off. Seven days later, an army of demons come to the temple. Outside its walls, they clamor for the monk. Weary of events such as these, he ignores them. They threaten to burn down the temple and feast on him, but he grabs a torch and fights back. The startled Badger reverts back to his true form and flees in embarrassment. Just before waking, the monk is visited by the Fox. She apologizes to the monk for the tricks she and the Badger played on him. She offers to leave, in shame. He says that she can stay, as long as she promises to stop playing tricks on him. He does not realize that the Fox has fallen in love with him. Some time later, the Fox over hears some demons talking while she is hunting. They say that their master, who is a yin-yang master, has ordered them to kill the monk before the next full moon. They say that their master plans to give him evil dreams for three nights. On the first night, he will dream of a box. On the second, a black key. Finally, on the third night, he will dream that he unlocks the box and then, he will lose connection with this world and soon die. The Fox also hears that if any of this was ever repeated, whoever does so would have their heart burst into flames. The Fox returns to her den we she grabs her treasured jade dragon. She throws the treasure into the sea, offering it as a tribute in return for knowledge of how to save the monk. She then returned to her den to sleep and has a dream of a large, black, shadow fox. The shadow fox tells her that the dragon belonged to a dear friend, and the ocean shall return it to him. The Fox sees strange animals in her dream and is told that they are “Baku” – “the dream eaters.” She is told that the Baku can eat away dreams of ill-omen, if invoked by the dreamer upon waking, and they will take what the dream foretells away. This gives the clever Fox an idea. She awakens with a faint whisper of “Catch his dreams” in her head.

Retrieved from "https://heykidscomics.fandom.com/wiki/Sandman_The_Dream_Hunters_Vol_1_1?oldid=1456656"
Community content is available under CC-BY-SA unless otherwise noted.