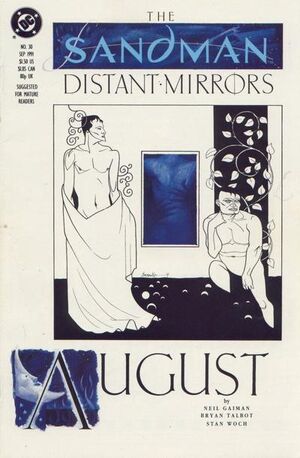 I do not do this for you, little emperor. I do it for another, who has asked me to intercede on your behalf.

In the month of August, the dwarf Lycius is called to an audience with Caesar Augustus. Today, Caesar asks him to teach him how to appear to be a beggar, and then, they will go out into the streets as beggars, forsaking their nobility for just one day. Lycius shows Caesar how to appear boiled and blistered by rubbing soap on his body and covering it with vinegar.
Together, they sit on the steps of the Temple of the Avenging Mars and beg for money. There, Caesar explains how he came to be chosen as his uncle Julius Caesar's successor, and the way in which the Roman people make Gods of their rulers.
Eventually, Caesar confides that he knows the future. He has read every book of prophecy, and he discovered that there are two possible futures: one in which the Roman empire falls in just a few hundred years, and another in which the entire earth becomes a province of the empire. He chose the future that seemed most right to him, and burned all mention of the other.
Caesar admits that the reason that he has become a beggar for the day is because he had a dream in which a strange man informed him that in order to appease the gods he fears, and hide his actions from them, Caesar must become a beggar for a day. On that day, the gods will not be able to hear his thoughts. Dream reveals that he knows that Julius Caesar, Augustus' uncle had raped him as a boy, and that it is he whom Augustus fears.
The day over, Caesar and Lycius part ways, and some years later, the dwarf met the emperor playing beggar again, but they did not speak. The empire did not expand beyond Europe and Africa, and Lycius wonders if this is the future that Caesar chose.

Retrieved from "https://heykidscomics.fandom.com/wiki/Sandman_Vol_2_30?oldid=1456707"
Community content is available under CC-BY-SA unless otherwise noted.