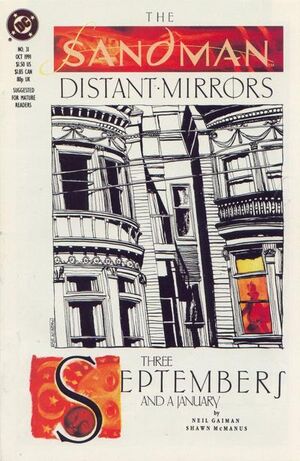 He has his dignity, sister-brother. He is, after all, an emperor.

Appearing in "Three Septembers and a January"Edit

Synopsis for "Three Septembers and a January"Edit

At San Francisco in September of 1859, Despair taunts a man named Joshua who has fallen into her domain. She sees in him a potential for despair, and calls on Dream to help redeem him. Dream refuses outright, but his sister taunts him, and warns that his other siblings would expect him to comply. Reluctantly, Dream sends Joshua to sleep.
In the dream, Joshua introduces himself as an entrepreneur and inventor. He feels that once he had room for dreams in his life, but now he has lost everything, and has nothing left to dream of. From outside the dream, Despair taunts her older brother with the notion that he may not be able to keep Joshua from despair long enough to prevent him from being taken by Death. Compassionately, Dream gives Joshua a dream.
Afterwards, Joshua leaves his apartment and delivers a proclamation to the local paper. This proclamation declares Joshua himself as emperor of the United States of America. By that authority, he orders the representatives of each of those states to assemble in the city's music hall on the 1st of February. This meeting will make alterations to laws that will relieve the country of evils it is belaboured by. By virtue of the audacity of the proclamation, the newspaper decides to print it all the same.
Death confronts Dream, remarking that the two of them do not get involved in the games of their younger siblings. He admits to having been provoked, and the two of them hope that he knows what he's got himself into.
Five years later, Joshua continues to believe himself a king, but spends most of his day standing outside the offices of the local newspaper, penniless. An editor named Sam has befriended him, and today he decides to take Joshua out for dinner. There, Joshua remarks that some have thought him mad for his plan to build a bridge across the bay to Oakland.
Also in the restaurant, Dream receives a visit from Delirium. She comments that Joshua ought to belong to her by now, given that his dream of being emperor of the United States is like unto madness. However, in every respect but that dream, he is sane.
Joshua realizes that Sam is a good storyteller, and offers his friend a gift. He writes down an imperial proclamation on a napkin that Samuel Clemens, who also writes under the name Mark Twain, shall hereby be the official story teller to the United States of America for the duration of his moral lifetime. Thanking Sam for the meal, Joshua leaves the bar and Sam to think about his writing. Watching, Delirium realizes that it is Joshua's madness that keeps him sane. Dream remarks that he is not the only one for whom that is true.
In 1875, Joshua Norton is still under the impression that he is emperor. One day, a tourist family from Kansas happens across him and they ask him if he will take their imperial tax of fifty cents in exchange for a receipt that they can take as a souvenir. Apparently, he has been doing this for some time. Later, a Chinese immigrant comes to him with a report about the spread of the Tong gangs. The man brings a further message that Joshua's presence is needed at a place called the Cobweb palace.
There, Joshua is met by a man calling himself the King of Pain. He claims to be dead, and that his principal has sent him with an offer. The visitor reminds Joshua that he has no empress, and therefore no way to ensure his dynasty. In exchange for a wife, the King of Pain demands only a tiny favour: he has to want one of the women. Sternly Joshua announces that he is the emperor of the United States and wants for nothing. The city has been charitable to him, and he is happy.
The King of Pain returns empty-handed to a coach outside, where Desire waits. Desire is confused as to how Joshua could refuse the offer, when he obviously lusts after women so strongly. Dream responds that the man's dignity was stronger than his lust. As Desire drives off, it vows to cause Dream to spill family blood; to bring the Kindly Ones down on him.
Five years later, Joshua finds himself caught in a torrential rain storm and eventually, when his umbrella flies from his hand, he collapses. Despair approaches and wonders that despite the fact that he now dies in the gutter, Joshua never despaired. Somehow, Dream won the contest. As consolation, Dream offers his sister a statuette that is sold in the city's souvenir shops commemorating their self-proclaimed emperor.
After both Dream and Despair have gone, Death arrives for Joshua Norton. As she leads him away, she tells him that of all the kings and queens she has met, she liked him the best.

Retrieved from "https://heykidscomics.fandom.com/wiki/Sandman_Vol_2_31?oldid=1456708"
Community content is available under CC-BY-SA unless otherwise noted.