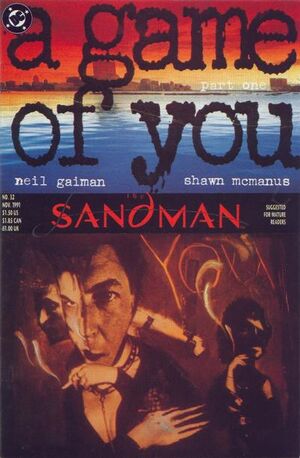 This is a bright place, filled with frightened people, and fast hard things that hurt and wound. No matter. I swore I would remain by her side forever, and until death divided us. I must walk until once more we are reunited.

Appearing in "Slaughter on Fifth Avenue"Edit

Synopsis for "Slaughter on Fifth Avenue"Edit

In a certain dreamer's land, the inhabitants worry that their future is a gloomy one, as their dreamer has not visited in nearly two years. With her gone, the Cuckoos will likely kill them all. One of them, Martin Tenbones speaks up, announcing that he has the porpentine, and will seek out the dreamer in order to save their lives.
In New York City, Barbie has lived by herself in a crappy apartment for two years. One day she is wakened by her friend Wanda, who decides that they are to go shopping, despite the fact that neither has any money. As she wakes, Barbie comments that she doesn't dream anymore. While Barbie puts on her makeup, she has Wanda ask around the other apartments for some cream to put in her coffee. Finally, she finds some, but in the end, the coffee is bad, and they decide to go out to Tiffany's, knowing that because they haven't got any money, it won't matter whether they shop there.
In the Dreaming, Dream and Matthew sense a change. Something has travelled from one state of existence to another. Reaching into his sand pouch, Dream peers into the event's consequences, and discovers that they will likely be negative. However, he intends to do nothing about it.
On the subway, Wanda and Barbie are approached by an elderly beggar woman. Barbie offers the woman some change, but suddenly the woman is frightened by a nearby dog. She is so completely afraid that she runs from the train. When she gets to the street, she comes face to face with Martin Tenbones - a giant dog. In her fear, the woman collapses.
Over real coffee, Barbie and Wanda return to the subject of dreams. Barbie explains how she used to dream of a strange land with a giant dog named Martin Tenbones who protected her in it, but after one particularly weird dream, she woke up and decided that it was time to end her relationship with Ken. After that, she never dreamed again.
After their breakfast, the girls walk out into the street only to find themselves amid a crowd of people trying to see past a police cordon. Over the people's heads, Barbie catches a glimpse of Martin Tenbones. Seeing her, Martin approaches, but before he can reach her, the police open fire on him, and fill him with bullets. Ther big dog lies bleeding in Barbie's arms as he struggles to explain that the land needs her. He gives her the porpentine, and then sadly, dies.
Wanda walks Barbie back to her apartment, and Barbie asks to be left alone. Outside the apartment, Wanda bumps into a man named George, who inquires after her. Meanwhile, Barbie examines the porpentine, confused as to how her dreams could seem to be becoming real.
In his room, George catches a crow, and swallows the bird whole. He warns, grinning, that while Barbie doesn't know the children of the Cuckoo, they know all about her.

Retrieved from "https://heykidscomics.fandom.com/wiki/Sandman_Vol_2_32?oldid=1456709"
Community content is available under CC-BY-SA unless otherwise noted.