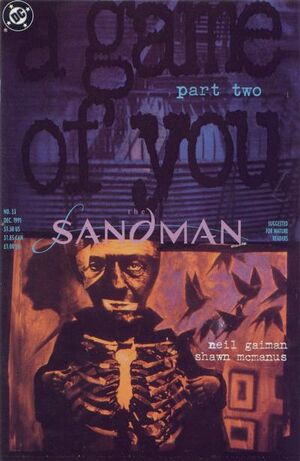 A world of curtains: I have been here before.

Appearing in "Lullabies of Broadway"Edit

Synopsis for "Lullabies of Broadway"Edit

While examining the mysterious porpentine, a gem given to her by a friend from her dreams, Barbie is interrupted by her neighbour Hazel. Quickly, she hides the gem and then lets Hazel in. Barbie is taken aback when Hazel - an out lesbian - reveals that she thinks she might be pregnant. She had got drunk and had sex with a waiter, and thought she would be safe from pregnancy because they had had sex standing up. Barbie tries to remain calm and helpful despite her friend's startling ignorance on the subject of human reproduction. She admits to having been pregnant once, and having had an abortion. She tells Hazel to get a pregnancy test and talk to her lover about it.
Still very tired, but afraid to sleep after the previous day's events, Barbie watches some TV. She is so tired that she begins having hallucinations about Hazel's future baby. Then, she sees something new, a strange looking woman who introduces herself as Nuala, and warns that something bad is about to happen. Then she begins to hallucinate that her ex-husband Ken is appearing on a talk show accusing her of being an attention seeking person, who is secretly boring.
Finally, Barbie falls asleep, and for the first time in years, she dreams. After passing through a world of curtains, she comes face to face with Wilkinson - a rat in a trenchcoat and fedora.
Elsewhere in Barbie's apartment building, each of the tenants spends their time in their own way. George waits patiently, Foxglove sleeps while Hazel reads, Thessaly brushes her long hair, Wanda struggles to sleep as she hears the hum of Barbie's TV next door.
Once everyone has fallen asleep, George undoes his shirt and uses a box-cutter to slice down his sternum, peeling away his skin to reveal a bare rib-cage. Out from underneath his open ribs fly several Cuckoo birds.
Wanda dreams of dress shopping, and the proprietress promises to give her all of the dresses she wants for free. Afterwards, the kids she went to school with express their envy of her. Graciously, Wanda shares her dresses with them. Still dreaming, Wanda doesn't notice a Cuckoo perched on her shoulder. In her dream, she dreams of a Weirdzo woman talking to her, only she is a man. The dream turns into a nightmare when the Weirdzos capture her and force her to have gender reassignment surgery.
Hazel dreams of being on a train, but she has no ticket. The ticket inspector takes her down to a cellar, inexplicably still on the train. In that cellar lies a box which contains the prize she won with her ticket. Foxglove watches as Hazel opens the box and finds the corpse of a baby that has been autopsied, dead nearly 70 years, but perfectly preserved. Foxglove already has a baby, and they put the two babies in a crib together. The dead baby comes alive and devours Foxglove's. Hazel knows it will come for them next. Both Hazel and Foxglove sleep with Cuckoos on their shoulders.
Foxglove dreams of being visited by her dead ex-lover Judy, who was killed by John Dee. Judy blames Foxglove for her death, and demands to know if she is seeing someone new. Foxglove admits that though Hazel is not as pretty as Judy was, she never hit her.
When the Cuckoo lands on Thessaly's shoulder, she wakes and catches it. She slams the bird against the wall, killing it, and then sets it on fire with her mind. The action seems to cripple George. Thessally dresses herself and knocks on George's door. When he answers it, she hides a knife behind her back.
In her dream world, Barbie meets the other residents of The Land, Luz and Prinado. She doesn't recognize them fully, and they are incredulous that Martin Tenbones thought she could save them from the coming peril. Even still, Wilkinson urges them not to give up on her. They begin their journey to the Brightly Shining Sea to stop the Cuckoo.

Retrieved from "https://heykidscomics.fandom.com/wiki/Sandman_Vol_2_33?oldid=1456711"
Community content is available under CC-BY-SA unless otherwise noted.