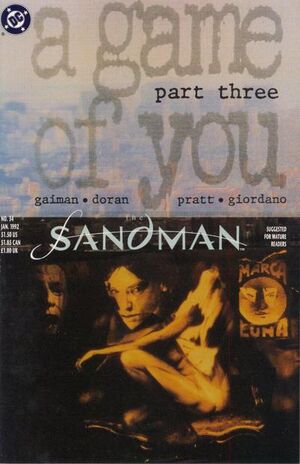 There are two ways into another's dreams. We can go through the dream king; or we can go by the moon's road. But the dream king has little time for you women, and even less for my kind; while the moon is ever ours. It's time to draw down the moon.

Late at night, both Hazel and Foxglove wake from disturbing nightmares and hold each other in tears. Their dreams were so vivid that they seemed real. They are too scared to go back to sleep, so they both just sit there with the light on holding each other.
Not long after, the couple receive a knock at their door from Thessaly. They attempt to play off their fear, but she questions them directly about whether they've had any bad dreams. She tells them that she plans to check on Wanda, and both girls decide to accompany her.
Unsurprisingly, Wanda has also been heavily shaken by a nightmare, and all of them start to sense that there is something more to these nightmares than there appears to be. Thessaly expresses concern for Barbie, and Wanda manically bangs on her friend's door, calling out to her. Thessaly insists that something is wrong, and Wanda uses her spare key to open the door.
Inside, they find Barbie lying on her bed, clutching the porpentine to her breast. Thessaly commands the girls not to touch the gem, as it may be all that's keeping Barbie alive. She has Wanda carry Barbara carefully up to George's room while she looks into some things. After Thessaly has gone, the girls talk amongst themselves about Thessaly's strange behaviour, and apparent knowledge of the situation. As Wanda hoists Barbie up into her arms, Hazel notices that she has a penis. Wanda comments that it's impolite to point out a lady's shortcomings.
In George's apartment, they are surprised to see a poster of Barbie on the wall, solidifying their feelings that he is a creep. Thessaly returns, and orders them to place Barbie on the couch, casually commenting that George is in the bathtub because he's dead and she killed him.
After the girls verify that George is indeed dead in the bathtub, they insist that the police be called. Thessaly explains that none of them can leave the room unless she wants them to, challenging Wanda to try. Wanda is perplexed to find that she cannot, in fact, leave the room. Thessaly explains as much as that George had sent the birds around the apartment building to give all of the girls bad dreams. She plans to get answers from George (despite his being dead), and believes that whatever his plans were, Barbie was central to them.
Thessaly slices off George's face, and - to the girls' disgust - nails it to the wall. She removes his eyes, nailing them in place, and then returns to remove his tongue by ripping it out with her teeth. With George's face recreated in a macabre façade on the wall, Thessaly calls on him to answer her questions. To everyone's surprise, the horrible face responds.
George claims to have been Gwag-y-Gwog, a servant of the Cuckoo. The Cuckoo had promised him things in exchange for watching the Princess Barbara. The Cuckoo intended to consume each of the girls by their nightmares, and have them destroy the porpentine. Thessaly demands to know where the Cuckoo resides, and George responds that it lies in Barbie's dreams.
Despite the supernatural situation, Wanda admits that she will do anything to protect her friend from harm, and the other girls agree. In order to help, Thessaly demands some menstrual blood - which means Foxglove, who is currently menstruating is the only one who can help, given that Wanda is a man and Hazel is pregnant. The Dream King is not known to listen to the pleas of women, but the moon is ever woman's.
Thessaly instructs Wanda to stay with Barbie while she, Foxglove, and Hazel gather around the bowl of blood and say the words that will take them into the dream. The moon is drawn down, and Thessaly calls on the moon to help them rescue Barbie. The moon responds that they should have asked Dream, but the moon is Thessaly's to command, and it does as she asks. Despite Wanda's desire to go with them, the three women are taken away, leaving Wanda standing alone in George's apartment with the sleeping Barbie.
Uncomfortable, Wanda talks to Barbie in order to feel more calm. She finds it strange that Hazel and Foxglove simply fell into the strangeness of it all, while she vomited. Wanda is suddenly horrified when George's face, still nailed to the wall asks to speak with her.

Retrieved from "https://heykidscomics.fandom.com/wiki/Sandman_Vol_2_34?oldid=1456713"
Community content is available under CC-BY-SA unless otherwise noted.