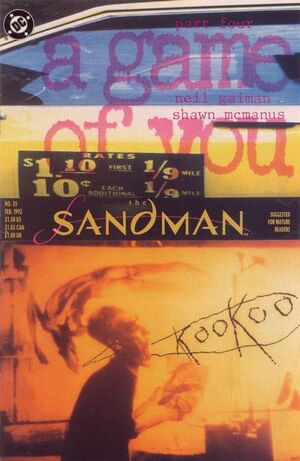 It comes to me now, Lucien. But it was a very long time ago. I had thought the skerry long-since crumbled, the compact forgotten and void. I was in error. Ah well. We must wait and see how things fall.

Appearing in "Beginning to See the Light"Edit

Synopsis for "Beginning to See the Light"Edit

In The Land, Barbie and her companions struggle to cross an icy tundra, with no cover to hide them from the Cuckoo's black guard. If they make it across the plains, they will come to a dangerous forest, where the mysterious Tweeners and even the trees will pose a threat. Though she is surviving, Barbie is very cold.
A ways ahead, Barbie spots something in the snow, and when they investigate, it turns out to be the frozen, mangled corpse of the Tantoblin. Barbie remembers him as a kind man who helped her once, long ago. He still holds in his cold fingers the message that he intended to deliver to Wilkinson, Luz, and Prinado before dying. The message contains several photos of Barbie from the real world, and a description of the behaviour of young Cuckoos.
Barbie insists that they bury the messenger. Once complete, they are suddenly frightened by the approach of the Black Guard, and they seek shelter under a small outcropping. Fortunately, the Black Guard marches past without noticing them.
In the Dreaming, Dream reiterates his decision to do nothing to do nothing about the danger that is occurring within the skerry in which The Land resides. Nuala the faerie interrupts to inform him that she warned Barbie of the danger in her dreams, despite Dream's orders to observe but do nothing. She apologizes, and after a pause, Dream admits that she did the right thing.
Barbie and company find their way to the forest, where there is no snow. They eat fruit and mushrooms harvested from the ground, and head deeper into the forest. Though they know they are not being followed by the Black Guard, they adventurers feel as though they are being watched. One day, Prinado failed to return from his scouting, and the group was forced to press on without him. That night, they wake to find the monkey's corpse dangling from a nearby tree. He had been killed by the Tweeners. Without hesitation, Wilkinson calls out for them all to run. Fortunately, the porpentine suddenly issues a glow which illuminates a path for them to take. The Tweeners will not follow them, and Luz, Wilkinson and Barbie manage to escape with their lives. They emerge at edge of the ocean, and Luz offers to go and fetch help for them from the village.
Waiting for Luz' return, Wilkinson suggests that it was more than luck that got them through the plains and the forest without any problems. He is sure that when they get to the Island of Thorns that something will somehow show them how to use the porpentine to save The Land.
Finally, Luz returns, but the friends she's brought with her are not there to help. She brought the Black Guard. She betrayed them. Wilkinson boldly steps in front of Barbie and tells her to run, but his throat is cut and he is skewered by the Black Guard's spears. Barbie fails to escape, and she is caught and taken into the city. Luz leads Barbie in shackles to the home of Cuckoo, inside a house that looks identical to the house where Barbie grew up, in Florida.

Retrieved from "https://heykidscomics.fandom.com/wiki/Sandman_Vol_2_35?oldid=1456714"
Community content is available under CC-BY-SA unless otherwise noted.